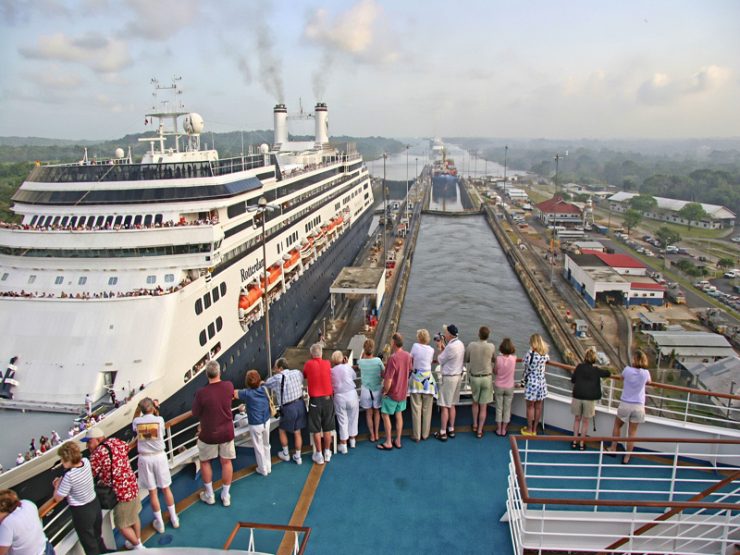 Cruising the Panama Canal Tourism. The Panama Canal development plan was first triggered by King Charles V of Spain in 1524. He argued if the isthmus in Panama was halved, it would lighten the journey of the Royal ships sailing from Ecuador to Peru or vice versa. Many European kingdoms agree with Charles V and support, but the discourse cannot be realized due to the limited cost and supporting science and technology.

About three centuries later, the French government realized to start the Panama Canal making project and the project was entrusted to Ferdinand Vicomte de Lesseps, an engineer who successfully established the Suez Canal in Africa. In 1878, France received Colombia’s government licence to construct the canal. The physical construction of the canal eventually began on 1 January 1880.

But then the construction of the project failed. The project began to consume many casualties and funds. This is due to lack of cost and absence of extensive geological studies and hydrology. In addition, malaria outbreaks and yellow fever are spread, so most workers are infected and killing about 22,000 people dies.

The construction process was stopped, while equipment made of iron and steel began to rust, and some workers chose to return to their country and the company that was established to build the canal was bankrupt. The French government eventually ceased the project in 1893.

As for why the United States was interested in take over the development rights of the canal was backed by the wishes of the United States who had previously wanted to build a canal in the Isthmus of Central America in Nicaragua, but failed. A canal on the Isthmus of Central America would greatly shorten the cruise distance, for example from San Francisco to New York. The need for national defence was increasingly felt at the Spanish-American War (1898) as AL Americans sent an Oregon forging ship from San Francisco to Cuba to strengthen the American Atlantic Fleet. The ship had to sail as far as 21 thousand kilometers around South America to reach its destination. And when the ship came, the war was over.

In 1903, with agreements between the United States and Panama, the United States had full rights to continue development and manage the canal after its earlier in 1902, the U.S. Senate approved the takeover of the project. America was also given the rights to the area on both sides (Panama Canal Zone) and built a military installation to defend the canal from foreign threats.

In 1904, through President Theodore Roosevelt, the U.S. decided to buy the remnants of a project equipment from France, and continued the construction of the Panama Canal. When the United States began to build the Panama canal, the first thing to do was to eradicate yellow fever. Based on the study of the United States Army Research Team (1900), they succeeded in discovering the causes of yellow fever, namely mosquitoes. Then, the action to be done, namely: drying the swamp, covering the holes of the water, the water gutters kept dry, and all the existing aqueous plains sprayed with gasoline.

How does the Panama Canal impact Panama and countries in the American continental region including the United States?

The Panama Canal, which has a length of 82 kilometers (measured from Limon Bay to the Gulf of Panama), is a connecting shortcut to the Atlantic and Pacific oceans. Through the canal, travel can be shortened about 13,500 kilometers. The Panama Canal also became an access point for world trade activity to have a significant influence on countries directly involved in export-import activities. In this regard, the Panama canal is capable of providing economic impacts to Panama as a region of Central America as well as countries that make this route a fast-paced cross-border track.

In addition, the Panama canal has impacted among them the increased efficiency and effectiveness of ship travel in export-import, increased state revenues for Panama, the creation of the Colon Free Zone as Panama’s Trade Center and Free trade agreements (FTA) with countries outside of the Americas.

Colon Free Zone is able to utilize the facility to import, store, assemble, package and export products such as electrical appliances, liquor, cigarettes, home furnishings, clothing, shoes, jewellery, and toys from all over the world.

Colon Free Zone is an important area for trading in the region of Latin America. Colon Free Zone Export Products has the largest buyer of merchandise i.e. Colombia, which buys almost 16% of export products. Other major buyers are the United States, Panama (domestic market), Venezuela, Guatemala, Ecuador, Costa Rica, Dominican Republic, Chile, Cuba, Honduras, Peru, Brazil, Nicaragua, and El Salvador.  These countries bought about 83% of all Colon Free Zone exports. As a result, the Colon Free Zone may be referred to as “the first free zone of the Western Hemisphere”.

The existence of the Panama Canal does not only serve as a means of crossing and economy alone, the canal is also a tourist attraction. The pioneers of the tour to the canal were cruise ships. The uniqueness of tourist attractions in the Panama Canal is tourists can see themselves how the process of entering and exiting the large ships in the “lock ‟ or insulation and watching how 197 million liters of water is used in a single process of insulation. In addition, tourists can also follow the process of the ship raised from one partition to the next, which is very interesting to see because Gatun Lake is 26 meters above sea level, if depicted the actual ship “up and down the mountain ‟ from Pacific Ocean to the Atlantic Ocean.

[nextpage title=”Canal Cruising In The South Of France Book”]

The existence of the Panama Canal has not only been a mere crossing, now this area becomes the attraction of tourists who visit by cruise ship. At first it was the beautiful Alaska exploration in the summer.

With the end of winter the ships operating in the Caribbean oceans will sell tour packages in Alaska. Since most of the cruise bases are located in East America then to reach Alaska or Canada they must pass through the Panama Canal. Until the transition crossing this season made a special tour package.

There are also some special cruises that travel just across the canal and then back to the destination area. The uniqueness of the tourist attraction here is that visitors can see for themselves how the process of entering and exiting the large ships in the ‘ lock ‘ or insulation, observing how the 197,000.000 LT water is used in a single process of insulation, Witnessed the doors of giant iron insulation with a width of 19.5 m and a height of 20 m and has a thickness of 2 m, followed how the process of the ship raised from one partition to the next partition. This is very interesting to witness because the presence of Lake Gatun is 26 meters above sea level, so if the ship is depicted actually “up and down the mountain” from the Pacific Sea to the Atlantic Sea.

The construction of dam at Gatun Lake is the largest dam in the world at the time and is the largest artificial lake. It is used as electric power for the operation of the Panama Canal.

But when the vessel is not used to pass through the Panama Canal, of course this size does not apply. Like the Panama Canal toll road It also applies toll service rates to users. The Panama Canal Authority determines the toll charges based on the type of vessel, size and type of goods carried. Passenger ships and freight vessels that do not carry the goods are counted separately according to the line.

[nextpage title=”Canal Cruising In The South Of France”]

Have you seen everything in the Panama Canal Zone? There is always a Panama Rainforest Discovery Center. No need to grieve when you have to say Adiós to the Panama Canal Zone, you can still visit on other occasions. If you want to get the nearest airport, it’s about 40 kilometers.